When I first laid eyes on him, he was laying on a porch swing reading a book about personality types.  He was tall, pudgy and lounging in a free t-shirt with mesh shorts.  Yes, the pure image of sexiness.

It was the summer of 2005 and I was moving into his fraternity house at Georgia Tech.  I had secured an internship working at the Governor’s Office making a whooping 12 bucks per hour!!  I would later find out that he had worked hard to rally the fraternity brothers into allowing girls to live on the top floor of the house for the summer.  I am guessing he was hoping for someone like me to show up which is why he was perched on the front porch on move in day.

One of the first conversations I had with him made me think he was a pompous jerk.  He told me that he had a job interview the next day and I asked what he was wearing.  He sort of scoffed at my idea of wearing a suit and tie to interview.  Instead, he insisted on a button down and khaki pants.  At least I realized he was a bad dresser from the first moment I saw him.

A few days later, Georgia Tech was doing a massive paving project and had my main route home closed down.  I got detoured to the west part of campus and after a few attempts, finally figured out how to get back to the fraternity house.  (This was pre-GPS-on-your-phone days).  When I arrived, I complained to the group gathered in the front room that I had no idea how to get around this “big city”.  He insisted on giving me his number as a “just in case it happens again”.  Ok, he may not know how to dress but he at least has some smooth moves.

We started talking on AIM (that’s short for AOL Instant Messenger, for those of you under the age of 30) late at night and early into the mornings.  I have no clue what we talked about that long but for some reason I was intrigued by this Tech guy and he was intrigued by me, a UGA girl.

My daily schedule that summer looked like this… Wake up at 7:55AM to the first whistle, be at work by 9AM, work til 5PM, nap from 5:30-7PM and then hang out, go out or AIM it up til 2AM.  Man, those were the days.  By this point, he had moved out of the fraternity house and was subleasing a room for the rest of the summer across from Grant Park.  This was probably good for my sleep regiment and made it possible for him to get some studying in for his last semester of college.

One evening, a few guys were getting together at his new place and I was invited to come hang out for a movie night.  They let me pick the movie and I chose “Out Cold“.  I had not seen it in recent years but remembered it being very funny.  Well, it was funny but I forgot about all the inappropriate parts including a hot tub scene.  Definitely not the best movie choice for a bunch of Christian guys to watch with me.

As the summer progressed, I became the social event planner; planning picnics, Braves outings, movie nights, dinners out, tubing trips, and overall just making sure it was a fun summer.  I had recruited my college roommate and her friends to come down and start hanging out with me/the guys.  On one outing, several of us went to Centennial Olympic Park to picnic, throw frisbees/footballs and genuinely just hang out.  I remember everyone tossing a ball or frisbee around and me telling my friend, Coker, that I thought something was going on with me and him.  She seemed surprised, and at that exact moment we both looked his way in time to see him almost fall down while trying to catch a frisbee.  Not his smoothest moment.

Our friend groups really meshed well including several new couples forming.  The weekends were a blast- everyone hung out together and there were some epic parties. One party really stood out in my mind.  It was mid June and a good bit of beer pong had been played.  Someone came up with a “great” idea to head across the street to the park for some golfing.  But not with golf balls, but instead with rotting limes left over from a cinco de mayo party.  Yes, you read that right, golfing with old limes.  This epic night is now simply referred to as Lime Golf.

In mid July, I planned a tubing trip to Blue Ridge, GA.  We spent the afternoon floating down the Toccoa River and enjoying the warm day.  Afterwards, my family friends graciously hosted us for dinner at their mountain cabin.  As we walked into the house, my dad’s friend shook his hand and said, “So you are the one I have been hearing about.”  I was totally mortified and embarrassed.

At the end of July my family was throwing a big birthday party for three family members in Augusta.  For some reason, I thought this was the best time to introduce him to my big, loud family.  Except, I never realized I had a big and loud family until this weekend.  My parents welcomed him to their home and had managed to shove a twin bed in the office so he’d have a place to sleep.  Both of my sisters were still in middle/high school so their big sis bringing home a boy for the weekend was a big deal.  Plus, it took a village to help raise me so all of that village couldn’t wait to meet him too.

The party is somewhat of a blur because there were so many people that I had to introduce to him.  He got asked so many times who we met that he finally started telling people that we met in DUI school.  Only a few didn’t realize it was a joke.  He also managed to drink about fourteen beers.  Thankfully, this is not frowned upon among that crew.  There was a DJ and we did some dancing on the back porch.  My baby sister saw us sneaking a quick kiss in the front foyer of my grandmother’s home and nearly peed her pants.  We went back to Atlanta the next day and he didn’t break up with me.  Success.

A few weekends later, I took him to Athens as my guest for a friend’s wedding.  It was the first time I realized how much he REALLY hated UGA.  For some reason, I kept him around anyway.  On the way back to Atlanta, we were in my mom’s LEAKING convertible and it started pouring rain, so he was soaked… even with the top up.

As the summer was winding down, he managed to graduate from Georgia Tech.  It was a big day and I don’t think he really knew for sure that he was getting out on the day of the graduation since grades weren’t in yet.  But, thankfully it happened. 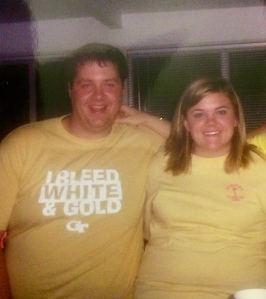 It was a magical summer spent making new friends, falling in love with this great city, and building a relationship with him.  We all have such fond memories of that summer and it is a bond that many of us will never want to forget.

Sadly, (or maybe thankfully) I couldn’t find my scrapbook from this amazing summer, so these few pics will have to do for now.

On the day of our 9th wedding anniversary, I think about how much I loved being with him then and how much more I love being with him now.  One thing that is always true in our relationship is that we have always been surrounded by great people who are cheering us on.  Today, I am thankful for them as well.